Scaring players is hard. I've been roleplaying for over 35 years now (admittedly with some long gaps) but I can only remember two occasions of real fearfulness. 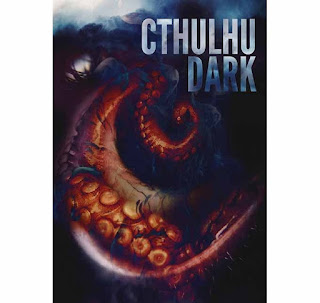 In the first, I was a player. I can't remember the details of the game, but we were playing Call of Cthulhu and we were exhuming the body of what we thought was a sorcerer. And I remember being on the edge of my seat as I imagined what we would find.

In the second, I was running Call of Cthulhu and the players were exploring the derelict half of an old mansion. There was nothing there for them to find, but I just made it as creepy and unsettling as I could. The players soon fled. I might be wrong, but it seemed to me that the players fear of what they might find overcame their boldness and they retreated to safety.

So my experience of playing and running Call of Cthulhu (and writing adventures for it) is that most scenarios involve solving a complicated puzzle - one with monsters. But they're not actually scary.


Cthulhu Dark is Graham Walmsley's cut-down rules set for playing Lovecraftian horror. He first published them as a free pdf in 2010, and in 2017 he Kickstarted a full hardback, which I backed.

Physically, the book is lovely. It has a gloriously understated cover by George Cotronis, black and white full page illustrations by Matteo Bocci, and maps by Stentor Danielson. The text is simply black on white, with the occasional boxed text.

If I had to pick one word for it, that word would be elegant.

The rules are wonderfully simple, and distils the Gumshoe "you never fail to find a clue" system to its essence. I won't describe them - you can read them here (it will be quicker for you to read them than it is for me to explain them).

As the basic rules take up two pages in the hardback, the rest of the 190 page hardback book is taken up with a more detailed review of the rules, excellent advice on constructing a horror scenario, a look at Lovecraft's creations and how to use them in Cthulhu Dark, and four settings, each with a detailed scenario.


What the full Cthulhu Dark book brings is its philosophy (which the free pdf doesn't explain). This philosophy can be summarised by three statements:

There's nothing stopping you from playing Cthulhu Dark using the basic free rules and treating it just like Call of Cthulhu. But I think you're missing a trick if you do.


Most of the Call of Cthulhu scenarios that I've written can be "won" in one way or another. There's a solution, an evil to be defeated. And that's fine - I'm happy with them all.

But my favourite Call of Cthulhu scenario (of the ones I've written) doesn't have a happy ending, and that's In Whom We Trust. That scenario typically ends with most of the investigators dead or having succumbed to a foul great old one. (If you want to see what I mean, you can find it here.)

And that's the Cthulhu Dark philosophy - investigators are doomed. The mythos threats are not there to be beaten, they're immense forces of darkness. The scenarios are about the investigators uncovering a truth that dooms them. (So much closer to Lovecraft's stories.)

Next time I run In Whom We Trust, I will probably use Cthulhu Dark. (But more on that below.)


Cthulhu Dark recommends that you play powerless characters. In his design notes, Graham Walmsley notes that this came about following his response to the usual dilettante Call of Cthulhu characters. So instead, Cthulhu Dark is full of the poor and working class.

Aside from any social commentary, I do think that taking power away from investigators increases the fear and horror. I approve of that.

As example, Alien features powerless working-class space-truckers, and is exquisitely scary. Aliens, on the other hand, is filled with powerful space marines. Aliens is a thrilling ride, but Alien is the scarier of the two.

And if you don’t like the idea of powerless characters, there’s nothing in the rules preventing you from playing the usual dilettantes if you want.

This is a scary game


Cthulhu Dark contains 38 pages of Director’s advice about creating a scary game. That’s something that was missing in Call of Cthulhu (although as I haven’t seen the latest edition, maybe that’s changed). Still, I’ve not seen such advice elsewhere. Such advice includes:

Lovecraftian Threats: There are no statistics in Cthulhu Dark’s list of monsters. Instead it is much more interesting and instead includes discusses how the threats might be used in a story. Cthulhu Dark limits itself purely to original Lovecraft (no Dark Young of Shub-Niggurath here), but also pushes that limit by including less obvious threats like the rats in the walls and reanimation solution.

Creeping horrors: Creeping horrors are “unexplained, unsettling moments of weirdness, which repeat throughout the mystery.” Their purpose is to unsettle the players. Cthulhu Dark suggests creeping horrors for each of the threats, such as the stink of the sea (deep ones) or sudden darkness (shining trapezohedron).

Themes: Themes are the topics that a scenario explores, what it’s really about. Again, themes are suggested for each threat. Suggested themes for the elder things are doomed civilisation and imitation (in relation to shoggoths).

Scenario/story design: Cthulhu Dark’s story/scenario advice is superb - I think it’s the best I’ve seen. This section covers themes, creeping horrors, locations, final horrors - and more. And it’s then followed by a way to look at your potential story from different perspectives. For example, The Descent suggests imagining your mystery as a descent into darkness. I am now tempted to go back to some of my old Call of Cthulhu adventures and “darken” them. (And I don’t think for a minute that’s as easy as just removing the stats.)


I have previously stated that I don’t like reading backgrounds, so for me, the four Cthulhu Dark backgrounds are mercifully short.

The backgrounds are London 1851, Arkham 1692 (written by Kathryn Jenkins), Jaiwo 2017 (a fictional African country written by Helen Gould), and Mumbai 2037. So that’s two “standard” horror settings, and two unusual horror settings. I was pleased to see that Cthulhu Dark omitted the usual 1920s and 1930s settings; I think enough has been written about them already.

Each background is 10-20 pages long, including a full page map. Over half of the background information is given to typical investigator occupations, and ideas for making sure their occupation is relevant in your mystery.

The occupations themselves are unusual - so the London 1851 setting includes cleaners, costermongers, mudlarks, housewives and toshers. Not your usual RPG characters then.

The rest of the setting provides enough to be able to run a game, and there’s a bibliography for each if you want to dive deeper. From my perspective, that’s just about enough background for me - if I need more I can look it up (or make it up).

The scenarios are all equally doom laden as the investigators work their way to the final horror. There are no happy endings for anyone. I think they’re great, with Screams of the Children and The Doors Beyond Time standing out as the creepiest.

I also like the fact that the mysteries are usually longer than the setting material. That’s the right mix of setting and background in my opinion!

However, I have two criticisms of the mysteries.

The first is that, for a book with “Cthulhu” in the title, none of them use any of the threats described in the rules. I actually think that the mysteries are all the more effective for that (and I can’t really complain about not using mythos creatures - I’ve done that myself). But it does seem odd that none of the mysteries in Cthulhu Dark uses the threats (with the exception of a blink-and-you’ll-miss-it reference to “man-faced rats” in The Doors Beyond Time).

My second criticism is layout, which doesn’t look as if it will help actual play. Cthulhu Dark is laid out in elegant blocks of text that are somewhat stark and minimalist. I really like it for most of the book - but not the mysteries, which need to be easier laid out so that information can be quickly found during an adventure. Here’s an example page: 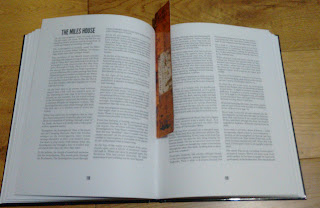 Okay, I admit that I chose a particularly bad page here, but that’s not how I like my scenarios to be formatted.

I’ve not tried playing any of these - but if I do I’m going to have to make lots of highlights and notes to make it easier to run.

From Call of Cthulhu to Cthulhu Dark


I really like Cthulhu Dark - it’s a simple elegant system and next time I run a Call of Cthulhu adventure I’d like to use the Cthulhu Dark rules.

Which of course I can - I can use them for exactly that. (And I probably will, as I’m not as familiar with Call of Cthulhu as I once was.)

But I think I’d be missing out on Cthulhu Dark’s philosophy of personal, doomed horror.

So I’ve been thinking about running In Whom We Trust again. And while I could run it exactly as written using the Cthulhu Dark rules (it is almost systemless as it is), I feel that if I did so I’d need to add creeping horrors, themes and think about what rolling a 6 means. I then started thinking about more structural changes to suit Cthulhu Dark’s philosophy, but then I may as well write a new mystery from scratch.

The fifth mystery - and a nagging problem


As part of the Kickstarter, Cthulhu Dark includes Mo Holkar’s As Good as a Feast pdf, a mystery set in dust bowl America that, again, doesn’t use any of the Lovecraftian threats. It’s laid out just like the mysteries in Cthulhu Dark itself. I don’t know if it will be available separately.

However, it was as I was reading As Good as a Feast, something else started to nag at me: all the mysteries are basically the same. All five are basically railroads where the investigators start to discover something untoward and are slowly drawn in before facing an evil entity. I don’t mind that as a storyline in itself, but I would have liked to have seen some variety. Maybe that’s what happens when your mysteries feature doomed, powerless, characters. But I hope not.


I really like Cthulhu Dark. It has done something few other games have done: it’s changed how I think about roleplaying. Before, I didn’t really find horror roleplaying scary. As I’ve said before, most gaming really isn’t scary at all - horror or otherwise.

But Cthulhu Dark has given me the tools to create unsettling, creepy games. And while I may use Cthulhu Dark’s elegantly simple ruleset, I suspect I will find those techniques creeping into my other games as well.

My biggest complaint is that about the sample scenarios/mysteries. I would like to see some variety, so maybe I won’t change In Whom We Trust too much. I like its current structure, but I think I can darken it and make it more unsettling.

As for the layout not being easy for me to run, maybe that’s just me. After all, I have read reports of people running the scenarios successfully. So perhaps I should get over myself and just run one.

Posted by Steve Hatherley at 09:25